DISKID was brought to life on June 16, 1987.
Since August 2009 DISKID is being run by me (Hank Monteban) and my partner Antoinette Kroon.
From our early youth on we 've been collectors of records.

15 YEARS OF DISKID IN THE VECHTSTRAAT 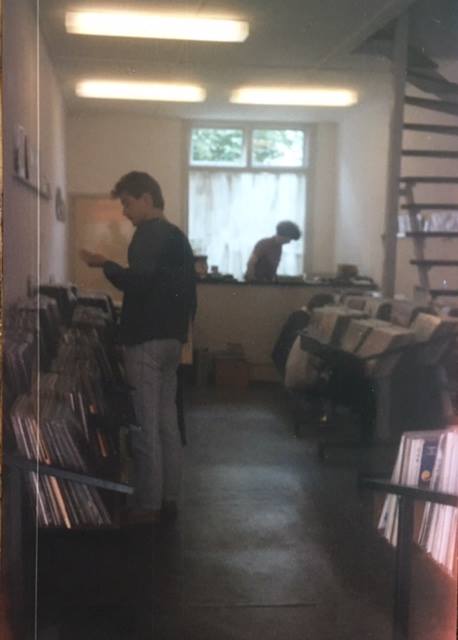 During this long period Diskid really flourished. Within a couple of years already, we were able to expand and remodel.

And then the Cd emerged. Reviewers of pop magazines and newspapers were being approached. They continuously delivered neat piles of records to this day.
Antoinette discovered the shop in 1998 en bought her first Lp at Diskid.
After some 15 years, surprise surprise, we moved to a smaller house, but hey, it was situated in the inner city!

Our customers themselves helped us out quite brilliantly when we moved to the Spoelstraat 14 and so we could open behind the Bieb (library) within a week's time. Sadly enough we had to move from there after more than 13 years. Forced by the perspective of spending our days in a construction site, we said goodbye to the spot. Demolition of the library and building a fashion house were the priorities and so we moved again in August 2015.

DISKID IN THE SASSENSTRAAT ( 7 years )

On September 2015 we started in the Sassenstraat which is a top spot and the best one ever for us. The feeling of having a good time in the bigger shop is quite a relief - for some it's a warm bath. The store was built up in a way that intensifies the *vinyl-experience* . Regularly we receive compliments like “This is not an ordinary record-store, it's a candy store in music heaven”.

We don't just get local people in the store, they're from all over the globe. At least 50 percent of them are from outside Zwolle. We're quite pleased with being so close to the customer.

In 2015 we got into the top 10 again of *Best Vinyl stores of the Benelux* ( about 250 stores! ), compiled by LPvinyl, the oldest vinyl platform in the Dutch language, up four places, at number two! In 2016 we succeeded to retain this fantastic second position. In 2017 we finally managed  to reach the coveted first position. In 2018 we won again by far and decided not to participate anymore.  Time for  a new winner..